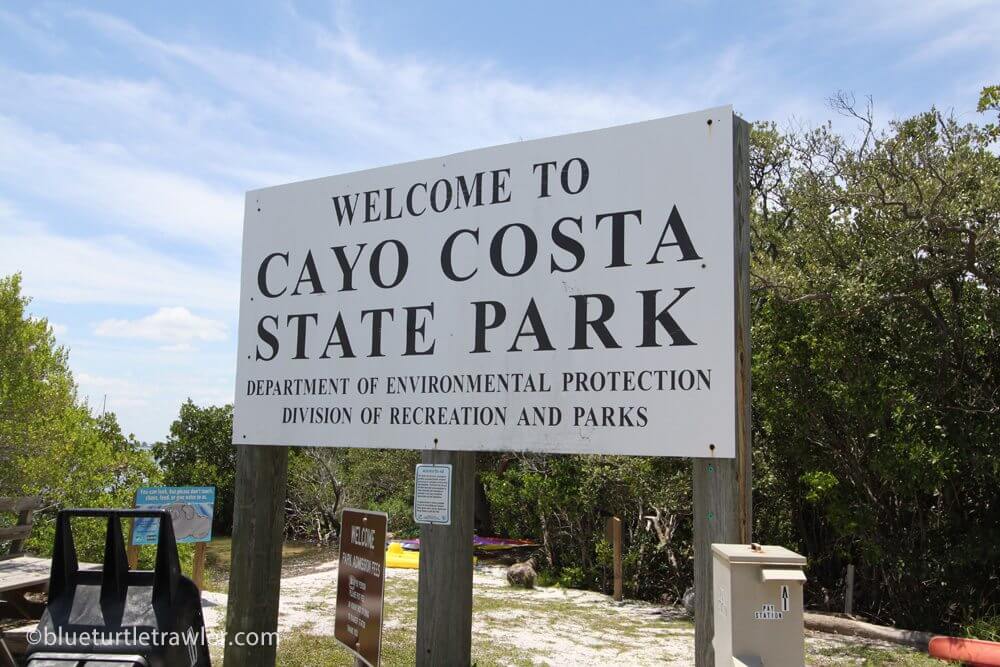 This past weekend, we headed to Cayo Costa State Park. You may have read about our last holiday trips to Cayo Costa on Memorial Day and Labor Day last year and over New Years. My parents were originally supposed to go on their trawler, Island Time, with my sister and nephews, however, my mother hasn’t been feeling well and they decided not to go. We took my sister and nephews with us since my folks weren’t going to come.

So, with my sis and nephews aboard and Corey and Randy, we took off on this past Friday. The ride there was relaxing and we had fantastic weather…in the upper 80’s but no humidity and breezy. By the time we arrived and got anchored it was around 3:30pm. The kids were restless and excited so we decided to pile into the dinghy and go to the nearest beach and let the kids run around until dinner time. This would be our test dinghy ride since trying to fit 3 adults, 3 children plus boogie boards, cooler, etc. was going to be a challenge. Somehow we all fit and since it was a short ride, we made it ok. When we returned to the boat, Corey and Jack decided to go for a kayak ride before dinner. After dinner, we enjoyed one of the many beautiful sunsets of Cayo Costa.

On Saturday, we decided to plan a longer dinghy ride to Cabbage Key for lunch and then head over to the Love Canal to go to the pristine beach on the other side.  Lunch at Cabbage Key was excellent and afterward, we took the kids up to the top of the water tower to look out over the island. After that, we piled back into the dinghy and headed on over to the Love Canal for an afternoon of fun in the sun on the beach.

When we returned to the boat on Saturday afternoon after the beach, we realized we now had a flotilla. Friends Nick & Holly on Knot Bad and Mike & Sally on Mystique had joined us. We had happy hour on on our boat that evening and Ron & Mary from Royal Tease joined us as well with their friends. We had a great time, but we all definitely missed having my parents with us. We had another gorgeous sunset and brought the conch out to let the kids and Capt. Nick blow.

Sunday morning we woke to peace and quiet. We were confused since the morning before we had 3 sets of little feet running around our decks and waking us. We realized that all 3 boys and Sophie were over on Nick and Holly’s boat. Holly was playing scrabble with Jack and the other boys were just hanging out quietly quizzing Nick about his boat. When we went to start up our generator to charge the batteries we had a screaching sound that we hadn’t heard in the past…it’s always something with a boat!  Before long, we had Randy and Capt. Nick sitting in the engine room dismantling the impeller. Mike soon joined for additional wisdom and support. In the end, we managed to fix our problem and we were lucky to have the experience of Nick and Mike there to help. Once the generator issue was solved, we decided to load up the dinghy and 3 restless boys and head over to the Cayo Costa dinghy dock. Once we were ready to go, we said our goodbyes to Nick and Holly since they would be heading home that afternoon. Once we arrived at Cayo Costa, we took the trolley across the island since we had so much beach gear. We had an awesome time at the beach with such great weather. After we returned from the beach, Tracy and I decided a nap was in order before dinner, so Randy took the boys on a dinghy ride. When they got back we had dinner and watched the sunset.

Monday morning, after Randy returned with the boys from a dinghy ride, we started to pack up and get ready to head home. We said our goodbyes to Mike and Sally who dropped anchor to stay a bit longer and pulled up our anchor. The trip was uneventful and relaxing as the weather this past weekend was just perfect. it was wonderful that it was cool enough that we didn’t have to run the generator all night with the AC.  We were very lucky to have perfect weather all weekend. When we arrived at Matanzas Pass we saw that there was a storm on the radar. We  hoped that we would get to Snook Bight before it hit us, but we weren’t that lucky. As soon as we felt the first gust of cold air, we knew we had to take action. We started zipping up the isinglass and securing everything on deck. With it looking pretty bad, we decided to send everyone downstairs to the main cabin and Randy would drive from below. When we reached Snook Bight, the winds were too gusty to dock so we decided to turn around and just keep cruising while waiting out the storm. Luckily, the front moved through pretty quickly and once the winds died down, we pulled into our slip and tied off.  It was quite exciting to go through this little drill and we decided it was good experience for us. While waiting out the storm, we heard a mayday go over on the radio. We listened about a sailboat who lost their engine and the sails and rigging were a mess. They were drifting towards Fort Myers Beach. Luckily, the Lee County Sheriff’s department reached them and were able to assist. Corey took this excellent video of Randy driving the boat in the lower cabin while listening to the radio call.