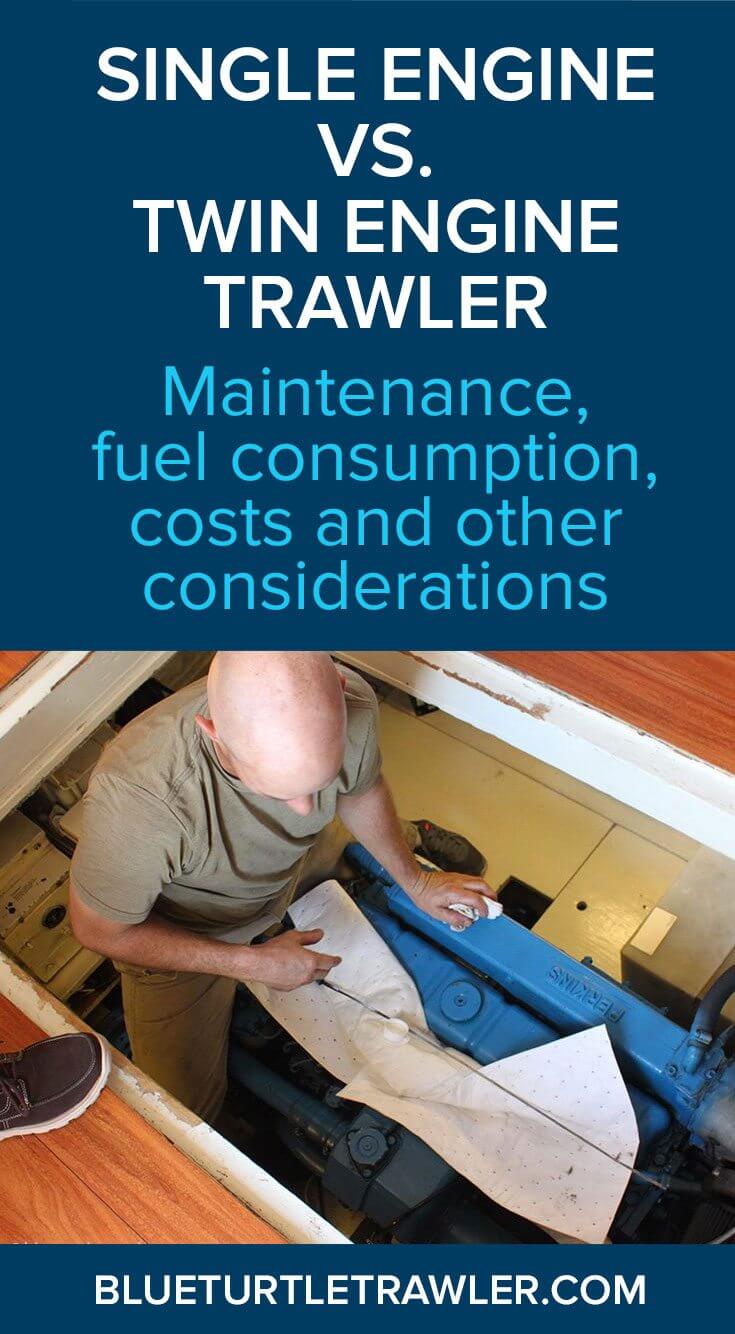 We’ve received several comments and questions about what our thoughts are on a single engine trawler vs. twin engines. Many folks have questions about the maintenance and operational costs as well as safety and redundancy. This topic of single vs. twin is always highly debated and there are good arguments for both sides. There’s a great article on Passagemaker Magazine regarding the subject as well as Knots and Boats and while single engines look really attractive cost-wise, a lot of people have a mental attitude that a single isn’t easily maneuvered or safe to cruise with. Everyone has their own opinion regarding the single vs. twin and this is simply our perspective since some of you readers have asked.

When we were looking for a trawler, Randy had decided on a single screw because of the lower maintenance cost and fuel efficiency. We figured we would have enough things on our hands being new boat owners and that one less engine to worry about breaking would certainly make us a little less crazy. We also wanted to be free to cruise when we wanted and didn’t want high fuel costs to keep us from doing that. We ended up with a 40’ DeFever Passagemaker with a single 185 hp Perkins diesel engine. Blue Turtle cruises at around 6 to 7 knots and uses about 1.5 gallons of fuel per hour.

Below are some things to consider when deciding between a single vs. twin engines.

Maintenance and operation costs are a major factor in choosing a single engine or twin engines. If you think about it, having two engines doubles everything from parts and labor for repairs to regular maintenance costs and fuel consumption. When we first bought Blue Turtle, we hired someone to perform oil changes, change fuel filters and impellers on both the Perkins and the generator and in general tune them up. They had found holes in both heat exchangers and ended up having to weld them together. This was caused by the pencil zincs being expired and not being changed out frequently enough by the previous owner. Our total bill for that initial tune up ended up being $6,000. Imagine what it would have been if we had two engines instead of one? After the initial shock wore off on this tune up bill, Randy decided from then on out he would learn the ins and outs of diesel engines and learn how to perform regular maintenance himself.

With two engines, most trawlers may cruise a couple knots higher than we cruise — about 8-9 knots but they consume twice the fuel. Blue Turtle, while a little slow, is a very fuel efficient machine. Just to give you an illustration of this, we asked a couple of folks what their cruising speed and fuel consumption were. Our friend Howard has a 42’ Albin with twin 120hp Lehmans and Johnny (Randy’s father) recently sold his 42’ Jefferson with twin 260hp Caterpiller engines. I should note here that Johnny’s motor yacht has a planing hull and we included 3 cruising scenarios for him below, running on one engine (which he mostly did to save money), running both engines going slow, and running both on plane (which almost never did). While his boat could actually get on plane and go fast, it cost him 20 gallons per hour to do so! Because of this, he almost always went slow and mostly only on one engine because to save money on fuel.

Using the cruising speeds and fuel consumption they gave us, Randy did a calculation of fuel costs for all 3 boats to go to the Dry Tortugas (our fav place) then to Key West and then home to Fort Myers Beach.

While twin engines do have their advantages with maneuvering, single engines aren’t impossible to dock. Without bow or stern thrusters, it would require some thinking and creative skills to maneuver, but it’s definitely doable and would take a little practice. We have bow and stern thrusters which is a little unusual to have both and it certainly makes docking Blue Turtle easier. Having at least one of the other would definitely be beneficial in moving around the docks. Randy says that in ways, he wishes he didn’t have both bow and stern thrusters so he could be more creative in docking.

Many folks believe that if you have twin engines, you have redundancy or a backup in case one fails. This can be true, but there are also times when something can cause both engines to fail, such as something wrong with the fuel. At that point, you have two engines to fix. In fact, the only time we’ve had an engine issue while out cruising was due to a problem with the fuel. If we had two engines, they both would’ve been down and we still would have had to call Boat U.S. or Sea Tow.  We mostly cruise within site of land and should anything occur that Randy was unable to troubleshoot, we can call Sea Tow.  I think it’s best stated in the Knots and Boats article “…consider the cost (economically and emotionally) of SeaTow the .05% of the time you need them, versus the cost of operating the boat with two engines 100% of the time.” There may be a time when we decide to cruise further like to the Bahamas maybe, and we are comfortable with our very well-maintained single screw and Randy’s ability to troubleshoot issues.  Obviously, a trip like that would require additional spares of everything should an issue arise. We feel that having one engine has allowed Randy to spend more quality time maintaining it and learning to troubleshoot issues with it. And one, well maintained engine can be just as reliable as two engines.

Another good point is made by Kurt Hoehne in the Passagemaker article referenced above, “Remember, as many failures occur due to damage to the propeller or shaft as to the engine itself breaking down. A single prop is usually protected by the keel, and therefore is less likely to be damaged.”

“…consider the cost (economically and emotionally) of SeaTow the .05% of the time you need them, versus the cost of operating the boat with two engines 100% of the time.”

Lets look at the pros and cons of both single and twin engines: 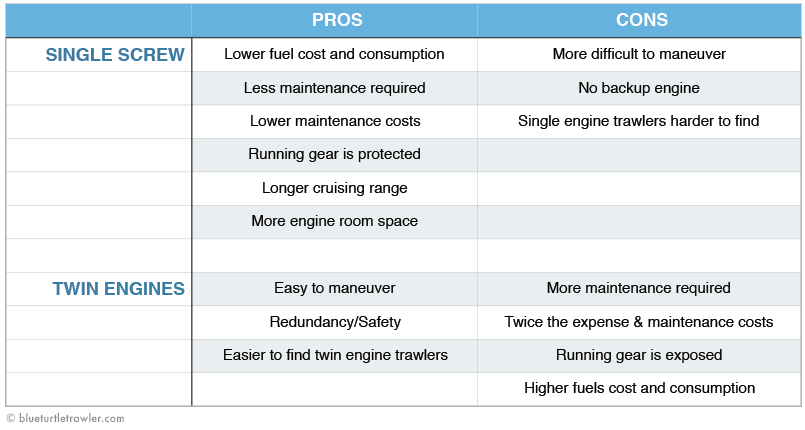 We already know that a single engine is more fuel efficient and has half the maintenance costs as twin engines. While they are more difficult to maneuver, it’s not impossible. With a bow or stern thruster or a little practice, they are dockable. Single engine trawlers don’t have a backup engine but if you maintain the engine diligently it should be quite reliable. There’s always Sea Tow if you’re within site of land and if you maintain and know your engine, you could troubleshoot the issue yourself. There’s less of a chance to damage the running gear on the single engine since it’s protected by the keel which accounts for a lot of the issues folks have out on the water. Besides the overall lower cost of a single engine, they do have a longer range. With the fuel efficiency, they can cruise further than dual engine trawlers. Most of the Kadey Krogens and Nordhavens are single engine trawlers for this reason since they cross oceans.

Bottom line, if you diligently care for and maintain your engine, you should have greater reliability and don’t necessarily need two engines. But it does all come down to your comfort level and how you feel about maneuvering the boat. When purchasing a trawler, you’ll need to factor in things like comfort level with single vs. twin engines, what type of cruising you plan to do, as well as your budget for the vessel and for cruising.