Our second full day in the Dry Tortugas (Wednesday) we decided to hit some snorkeling spots. Since we used up 1 tank of air on the first day of diving, we decided to spend a day snorkeling that way on Thursday would could do 2 more dives with the other tank of air.

We left the anchorage around 7am and our plan was to first snorkel the Windjammer wreck and then catch a mooring ball at Little Africa. Both sites are near Loggerhead Key where the lighthouse is located. We arrived at the Windjammer mooring ball around 8am but the ball was taken by a research vessel. We hailed the captain to ask how long they would be and we were informed they would be there until at least noon. Normally, there is a time limit of 2 hours on the mooring balls in the Dry Tortugas but perhaps it is different for research vessels. Since snorkeling the wreck was out for the morning, we headed over to grab a ball on Little Africa and planned to spend the morning there in hopes to catch the Windjammer in the afternoon.

Little Africa is by far the best snorkeling spot in all the Dry Tortugas and the Keys. It is located on the west side of Loggerhead Key. It is a very large, shallow reef which makes it ideal for snorkeling. The visibility is always amazing and it feels like you are swimming in a giant aquarium. We grabbed a ball at the southwestern side of the island and paddled to shore where we walked north on the beach until we were adjacent to the lighthouse. As we walked on the beach we noticed that a house-like structure and dock that we used to get the beach last year was split entirely in half. Last year the house and dock were in tact, however, in the past year a storm must’ve washed out part of the beach separating the structure. Once past the split structure, we suited up with our masks and fins and entered the water. We snorkeled for the next 3 hours and ended up paddling back to the mooring ball and Blue Turtle. 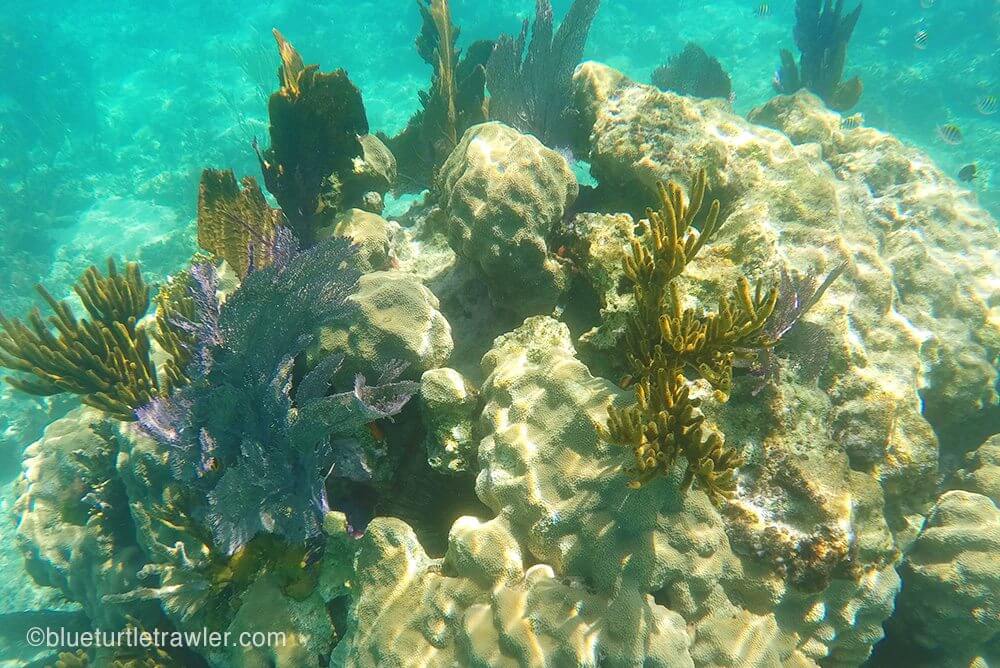 After snorkeling Little Africa, we noticed that a catamaran was waiting for the research vessel to leave the Windjammer. A park ranger came by our boat to let us know that the research vessel would be leaving soon and suggested we work something out with the catamaran to share the mooring ball. Once the catamaran was hooked up to the mooring ball we asked them if we could raft up with them and they said that would be fine.

The Windjammer is one of our favorite spots to dive or snorkel and it never disappoints.  It is located less than a mile southwest of Loggerhead Key and is the most complete wreck site in the Dry Tortugas. The wreck lies in about 20 feet of water and is in two main fields, the bow portion and midships/stern/mast structures with part of the wreck actually sticking out of the water.

After the Windjammer wreck we headed back to the anchorage. It was later in the afternoon that the previous day because of the delay waiting for the mooring ball for the wreck. Scott, Matt and Corey headed out in the dinghy to do some more fishing and Randy and I headed to shore to snorkel the north beach and coaling docks. We found out last year from some other folks staying in the anchorage that you can collect sea glass on the northern beach on Garden Key. Apparently, they burn trash near there and the glass is mostly from bottle or from the fort itself. A lot of the green glass we found was too new—just plain glass—and needed to be softened down by the sand some more but I did find a few green pieces and quite a few white sea glass pieces. After snorkeling the beach and hunting for glass, we headed around the corner to snorkel the north side coal docks where we saw large schools of bait fish and huge tarpon. Randy and I figured that we spent probably 6-8 hours in the water snorkeling that day. We were all exhausted and headed to bed pretty much right after dinner and sunset.

Home is Where the Anchor Drops

Receive updates from us by email.

We respect your privacy and will never sell, rent, lease or give away your information to any third party. Nor will we send you unsolicited email.