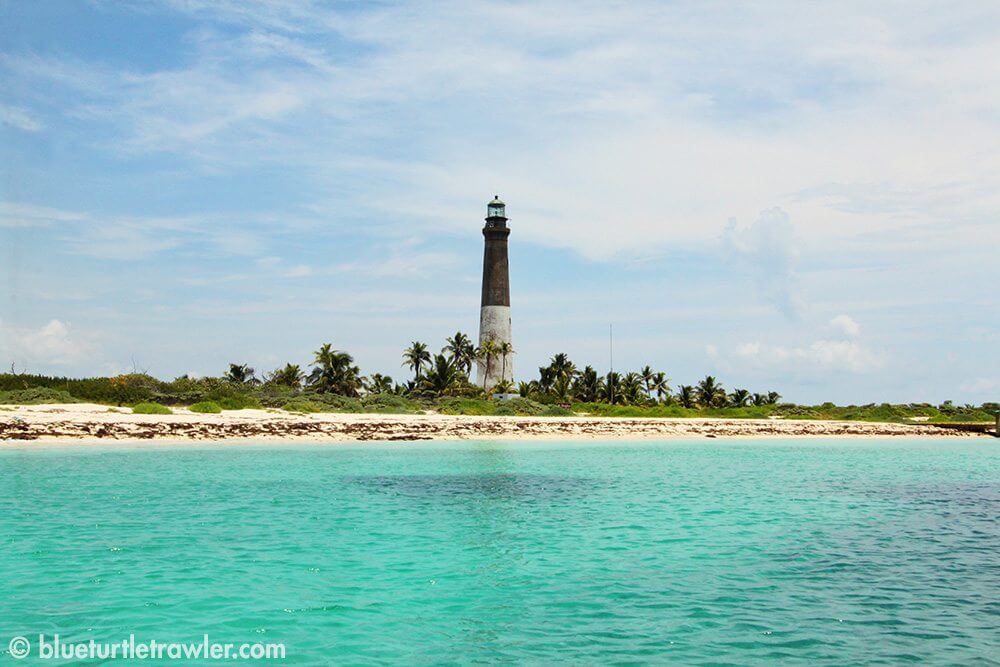 After the storm and winds came through the previous evening, we were hoping for the winds to calm down some. We wanted to take the boat over to Loggerhead Key and check out the lighthouse and windjammer wreck. One thing we didn’t realize about the Dry Tortugas is that the other little islands are just a little too far away to take the dinghy. Loggerhead Key was over 3 miles from our anchorage and we would have loved to take the dinghy rather than Blue Turtle, but it would’ve been a rough ride in the waves and current. We noticed a catamaran in our anchorage that towed a 22′ center console boat that they used to island hop. They had the right idea. The rest of the boats mostly took their larger boats (rather than dinghies) to the various other islands. Randy did a quick check of the weather and we decided to pull the anchor and head over to Loggerhead Key.

The lighthouse on Loggerhead Key is known as the Dry Tortugas Light and along with the lighthouse on Garden Key, they were the only lights on the Gulf coast that stayed in full operation throughout the American Civil War. Other than the the lighthouse, Loggerhead Key is also the sight of the Windjammer wreck which is located on the south side of the island. It was discovered in 1971, but not identified until 1990 as the Norwegian Avanti, which sank January 22, 1907 while en route to Montevideo, Uruguay from Pensacola. There is only one mooring ball on the wreck and luckily, we were the only ones there at that time. It was pretty lumpy and wavy that day, so we decided to only snorkel it as opposed as scuba diving. The water was crystal clear and the structure of the wreck was amazing, part of it even stuck out of the water. This ranks as the best wreck I’ve snorkeled or dove before because of the incredible structure and abundant fish and coral. We actually wished we were able to dive this wreck to be able to see more of it up close, but we had a wonderful time snorkeling it for over an hour.

After we finished snorkeling, we decided to head around to the other side of the island to hook up to a single mooring ball there. From there, we took the dinghy into shore and explored the island and lighthouse a bit. There isn’t much on the island other than the lighthouse, but the water surrounding it was crystal clear. It was absolutely beautiful. After checking out the lighthouse and island, we returned to the boat and headed back to our anchorage. We enjoyed the rest of the afternoon in the water around the boat and prepared to depart for Key West the next morning. We thoroughly enjoyed our time in the Dry Tortugas and decided that we would definitely come back again to explore it some more.

Here is a video I put together of some footage shot at the Windjammer wreck.