After leaving Jewfish Basin on Wednesday morning, we headed north where we planned to anchor at Cape Romano. It was a long day of cruising that was mostly uneventful until we ran into a storm just south of Cape Romano. We buttoned everything up on the bridge and the boys came down and drove Blue Turtle from the lower helm.  Sophie and I were not happy campers, we estimate that we had 8-10 footers. I normally don’t mind some small waves, but when the furniture is moving, cabinet doors are flying open spilling dishes everywhere and waves and spray are crashing over the bow, I’d like to pass on all that. We endured the weather for about an hour to an hour and a half before things calmed down and we got close to our anchorage. As we pulled into the anchorage, we spotted the famous “dome home.” We anchored Blue Turtle and relaxed the rest of the evening with plans to take the dinghy over to see the dome home the next morning.

I’ve been wanting to check out the dome home for some time since it is a bit of a local attraction in the area. The home is now abandoned and slowly slipping away into the Gulf of Mexico. It was built in 1980 by a retired businessman, Bob Lee, as a vacation home for his family.  Originally built on 4 plots of land on Caxambas Island, the home was built to be self-sustaining and solar-powered. The home was sold 2 years after completion to another family and then repossessed when that family ran into financial problems. The Lee family lived in the home until 1992 when Hurricane Andrew came through. The hurricane didn’t damage the foundation or home’s walls but destroyed the interior. The home was abandoned in 1992 and later purchased in 2005 by John Tosto just before Hurricane Wilma caused a fair amount of damage to the domes and washed away some of the coastline. Tosto faced many challenges with trying to renovate the home and ran into many issues with the Department of Environmental Protection and the Collier County Code Enforcement Board who eventually ordered the home to be demolished. The home was never demolished and now sits in 6-8 feet of water, slowly sliding into the Gulf of Mexico. 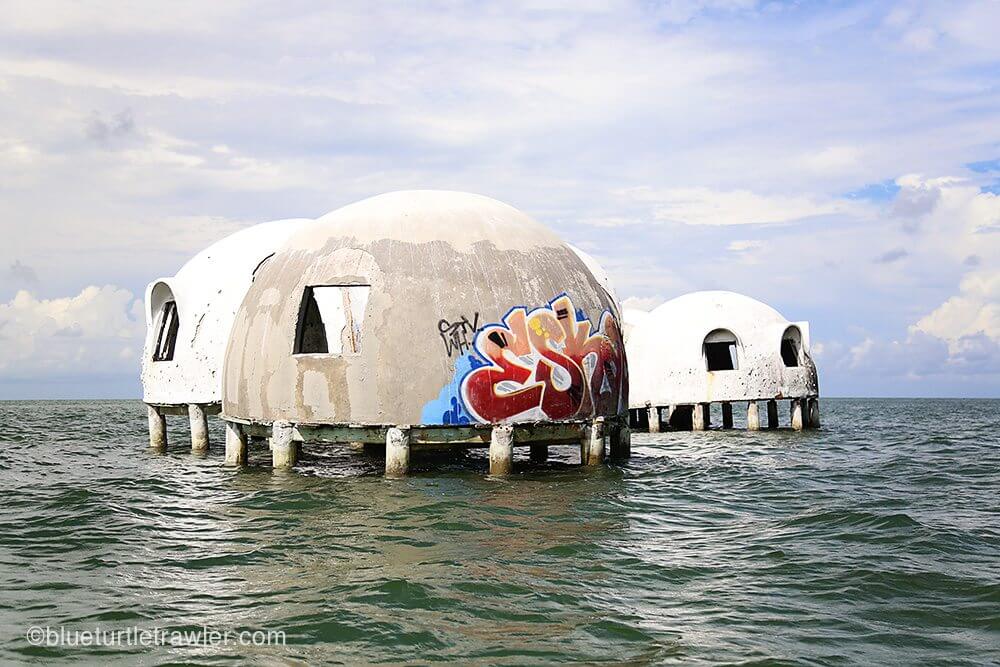 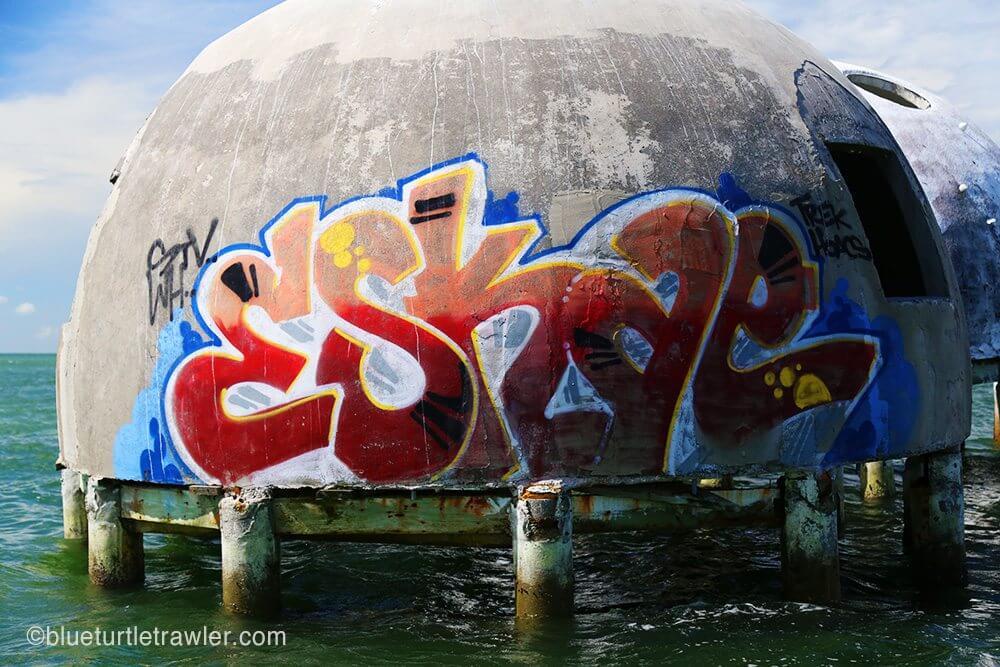 After exploring the dome home, we checked out the nearby beach before heading back to the boat for lunch. We had an afternoon storm roll through that finished in time for us to have happy hour on the beach. It was an uneventful afternoon and we planned to head north to New Pass the next morning. There really isn’t much to do in the Cape Romano anchorage other than visit the dome home. It is a nice anchorage through and is suitable for an overnight anchorage. We only stayed 2 nights so we would have time to visit the dome home.

The next morning, we headed the New Pass. Corey wake boarded behind Blue Turtle off the Naples coastline on the way. Once we were anchored at New Pass, we hung out on the boat playing Jenga waiting for afternoon showers to roll through. We stayed at New Pass just the one night before heading home to Snook Bight the next morning. It was bittersweet … the trip was so amazing!