Last weekend marked our third attendance at the annual Fort Myers Beach Boat Parade organized by the Fort Myers Beach Chamber of Commerce and hosted by Salty Sam’s Marina. Last year, we cruised from Snookbight Marina to Salty Sam’s to the stay the weekend and enjoy the parade which was being staged there. This year since we are already at Salty Sam’s, we were already in parade central and so we decided to have family and friends over for a parade party.

Of course, this meant that we had to get the boat cleaned up (which is quite a chore!) and then decorate with lights. After a couple trips back and forth to Walmart and Target to purchase new and replacement lights, we finally had Blue Turtle looking festive. Randy secured our wiener dog reindeer to the bow pulpit and anchor as the finishing touch.

The morning of the parade was spent running errands and getting ready for the party. Salty Sam’s crew was busy moving boats and tending to the incoming parade boats. Crews of various parade boats were busy putting the finishing touches on their decorations. It was hard to believe we were all getting ready for Christmas when the temperature was 85 degrees. Thankfully, as our guests and parade-goers started to arrive the temps cooled a bit. There were flashes or green and red all over the docks as folks moved about decorated in their Christmas best.

This year’s parade was no disappointment. We had boats of all sizes with colorful lights, each trying to stand out from the others with huge dolphin on the bow, lighted sharks and blinking displays that dazzled the waters. The parade began at Salty Sam’s Marina and went though Matanzas Harbor passing such establishments as Matanzas on the Bay, Nervous Nellies, Doc Fords, Dixie Fish Co., Shrimp Dock, and Bonita Bills where folks lined up to view the boats.

As we had food and drinks on Blue Turtle, we waited for the return of the parade boats where we could get a good view of them out on the water. Marina friends, Will and Tiff (check out their blog), let us invade their Bluewater, Wiffersnapper, for the best view in the marina. They are located at the end of our dock giving us full access to the parade as it entered the marina. We humbly thank them for letting 10+ folks come view the parade from their bridge. Once the parade was over, it was time for our friends and family to head home. Randy and I walked the docks to get a closer look at some of the boats and check out the afterparty going on in the Chamber tent for the parade participants.  We decided that this would be an annual event for us if we remain at Salty Sam’s since it is so much fun and a great opportunity to invite our friends and family aboard. 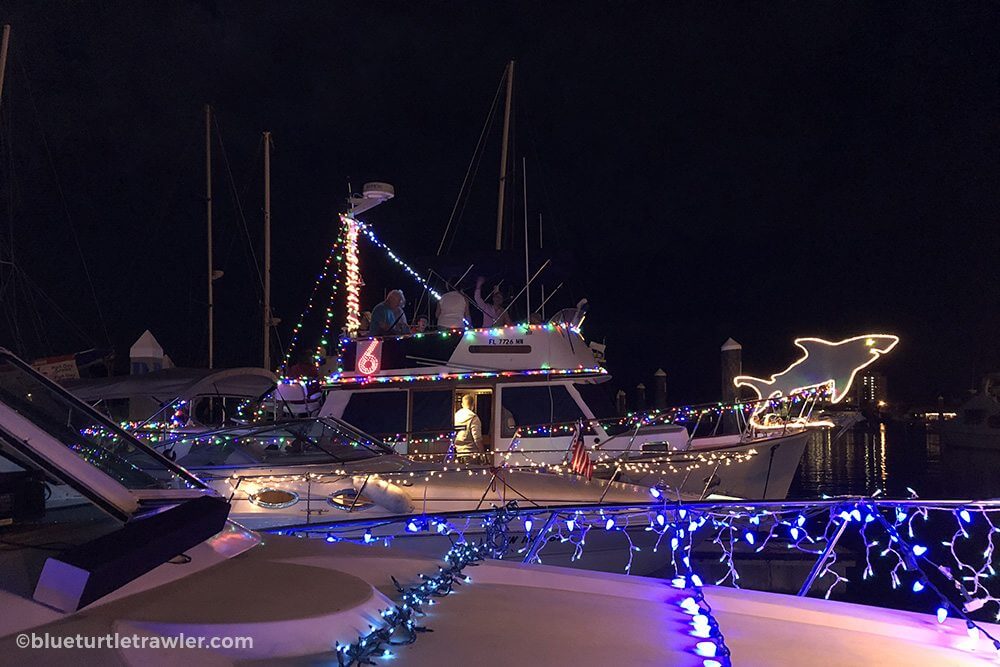 Home is Where the Anchor Drops

Receive updates from us by email.

We respect your privacy and will never sell, rent, lease or give away your information to any third party. Nor will we send you unsolicited email.