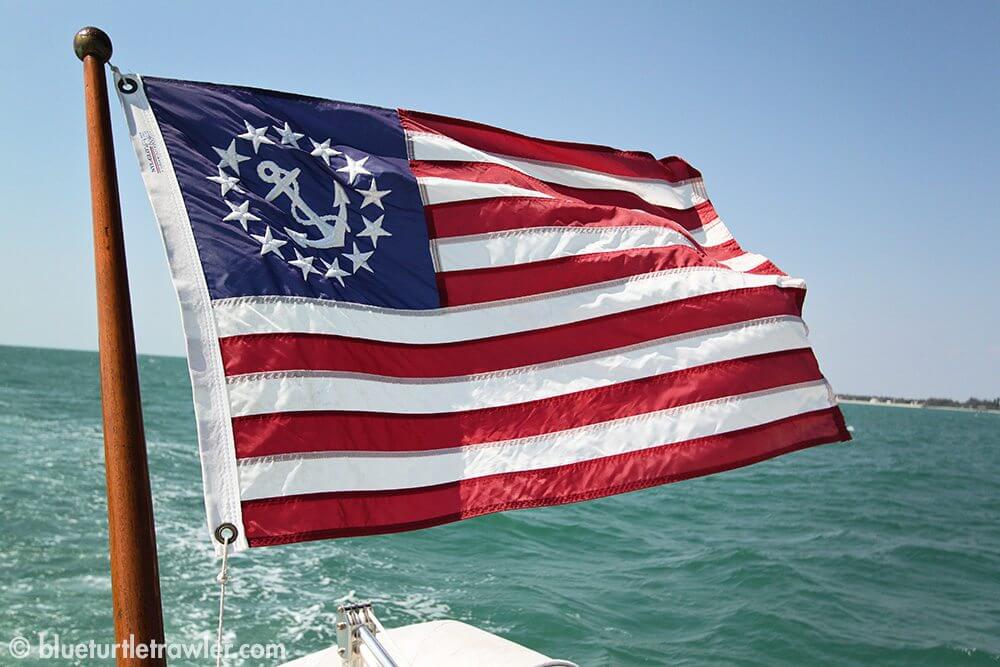 With the holiday weekend over Memorial Day giving us a little more time away, we decided to head south toward Keeywadin Island. This was our second trip there, the first being right after Christmas 2013, and we were excited to explore this area again. The 6 hour trip there was uneventful and once we were anchored we immediately splashed the kayaks and headed to the beach for sunset. As usual, it was gorgeous.

On Saturday a.m. hoards of boats began to arrive in the area and jockeyed for position on the beach. By early afternoon, the beach was packed like sardines with boaters. It was more of the same on Sunday as well. If you didn’t get to Keewaydin beach by 10:30 a.m., you weren’t going to have a spot. Luckily for us, we have a dinghy that can pretty much go anywhere, which we did. Our plan for weekend was to get to the beach early in the day and leave around 3:00 for some down time and early dinner. Then head back to the beach for a couple hours in the evening, staying until sunset. The evenings were wonderful since it had emptied out as all the day boaters headed home. It was like we had the beach and island to ourselves.

During the day, however, was a different story with several DJs and large speakers set up. Music was loud since neighbors had to compete with volume to hear there own tunes. One group on the beach had a generator in order to run a very large (and loud) speaker which blasted latin tunes across the entire island. Blue Turtle happened to be anchored right in the path of this speaker and after listening to the blaring music all day, we patiently waited for them to leave. We were stunned when this group started setting up tents indicating that they were going to camp that night. The great thing about living on a boat is that you can move it to wherever you want, which we did. We pulled up our anchor and moved north a ways and re-anchored in order to get out of the path of this blaring music.

Other than the blasting music, the rest of the weekend was awesome. Corey got his fill in surfing, boogie boarding and skim boarding. He’s getting really good at skim boarding lately. When he first started, Randy and I would cringe every time he wiped out playing that it wouldn’t send us to the hospital. He now seems to crash a lot less and has better control of the board. He even learned a new trick from an older beach goer who was also skim boarding. The boys (Randy and Corey) got a little snorkel time in as well since the water was so clear. They reported seeing lots of large snook, spade fish, snapper and a goliath grouper. On Sunday, we took a dinghy ride in to Marco Island to go to the famous Snook Inn for lunch. At first, we entered the wrong pass and wound up at Isle of Capri but then we quickly found our error and got on the right track. Snook Inn was very crowded but we quickly got seated inside. I was happy to find that they had fresh snapper on the menu and ordered a blackened snapper sandwich.

When it was finally time to depart, the Blue Turtle crew secured the dinghy and raised the anchor in order to head home. The ride home on the Gulf of Mexico was calm and beautiful unlike our ride there (which was a little choppy). As usual, the weekend went by way too fast.